Muskies are infamous for being finicky, stubborn, and hard to catch. When you’re looking for that “fish of a thousand casts”, you want to make sure that the one you do catch is worth your while. Luckily, finding where to catch trophy muskellunge is just a matter of following a biological equation.

One of the biggest – and simplest – factors in how large a musky can get is the size of the lake, reservoir, or river where it lives. In fact, 70% of the lake to lake variation in ultimate muskellunge length can be explained by the lakes’ sizes in acres. Even if a body of water is large enough, though, it still must support the correct ecosystem for muskies to thrive. There must be adequate vegetation for hiding – so that adults can hunt and juveniles can avoid predators – and a strong prey fish community.

For one week after having hatched and absorbed their yolk sac, juvenile muskies eat small aquatic invertebrates before graduating to fish. Suckers, yellow perch, and minnows make up the vast majority of the average musky’s diet. On occasion, muskies will eat other sunfish, crappie, walleye, or bass, but these instances are not the norm. So for any healthy muskellunge population to survive, an array of aquatic invertebrates and prey fish of many sizes must be present. Studies have suggested that, while muskies and other gamefish often hunt the same species, the most severe competition that muskies face is from other muskies.

It doesn’t take being a fisheries biologist to figure out that denser fish populations mean smaller fish. The more conspecifics – fish of the same species – muskies have to fight for food, the less food there is to go around. It is especially crucial for young fish to have an abundance of food for two reasons: smaller muskies are much easier targets for predators, and muskies that reproduce at a smaller size often experience crippled growth rates.

In populations of mainly small fish, there aren’t enough big, sexually mature individuals to take on the responsibility of reproduction and to pass on their superior genetics. Without these older fish to push them out, relatively small muskies can spawn. Up until this point in their lives, all their excess energy was allocated to growth. Now, that energy is being divided between growth and reproduction. The energy it takes to find mates, produce eggs or sperm, spawn, and return from the spawning grounds is incredibly costly. And all that time the smaller fish are eating.

How well the population as a whole can turn that energy into growth becomes a genetics issue. There are three genetically distinct lineages of muskellunge in the United States: upper Mississippi River, Ohio River, and Great Lakes. Studies have shown that stocked muskies contribute relatively little genetic material to native populations, so each lineage is more or less “pure”. Each of these lineages has been geographically separated from the other since the glaciers retreated, allowing them to drift apart genetically.

A University of Illinois study published in 2018 focused on how muskellunge fare outside of these native ranges. The researchers put age-0 individuals from the Ohio River stock (from Cave Run, Kentucky) and the upper Mississippi River stock (from Leech Lake, Minnesota) into controlled outdoor ponds at the Sam Parr Biological Station in Kinmundy, Illinois. For a year, both groups were fed equal amounts of fathead minnows and experienced the same environmental conditions.

Between the two groups, the Ohio River muskies coped much better than the upper Mississippi muskies did. Not only did the Ohio group have higher survival rates, its individuals grew faster. The Illinois ponds fell within the native latitude range of the Ohio stock, meaning that the climate during the study was comparable to the climate that native Ohio strain muskies would experience. Because of their enhanced ability – or the Mississippi strain’s decreased ability – to cope with the conditions, the researchers concluded that each has adapted to experience optimized growth in their native ranges.

The formula for big muskies is a combination of genetics and environmental factors, but anglers would be wise to search out big waters with small, native populations of muskies to find big fish.

You’re on your own as far as catching them, though.

Photos courtesy of Curt Wagner at the Ohio Department of Wildlife. 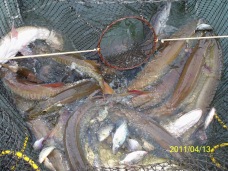